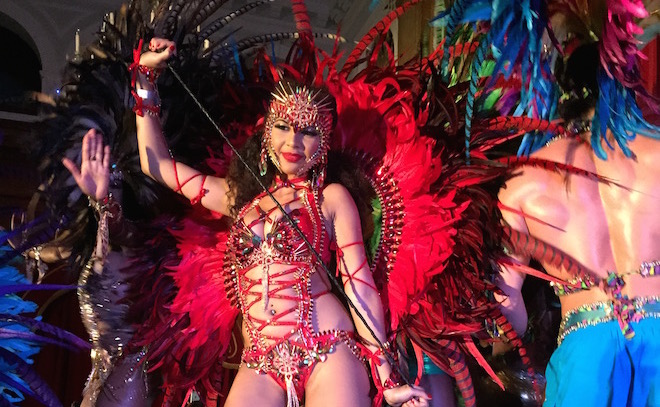 It’s been a while since I’ve been to West London, but here I am, in Queensway, at the elegant Porchester Hall, for UCOM costume reveal.
It’s the first band launch of the season. UCOM is celebrating 10 years on the road (hence the theme name: Reflect10n).
For the second year in the row, prolific Creative Director Paul O’Donogue has designed carnival costumes for no less than 4 bands. His own: United Colours of Mas and also for Socaholic UK, Hype Mas and Karma Infinity Mas Band.

To mark the anniversary, a popular theme from each ten previous years has been revamped and brought to life.

From this year’s Mythodyssey, Return of the Dragon. A great flowing design in lime, turquoise and purple 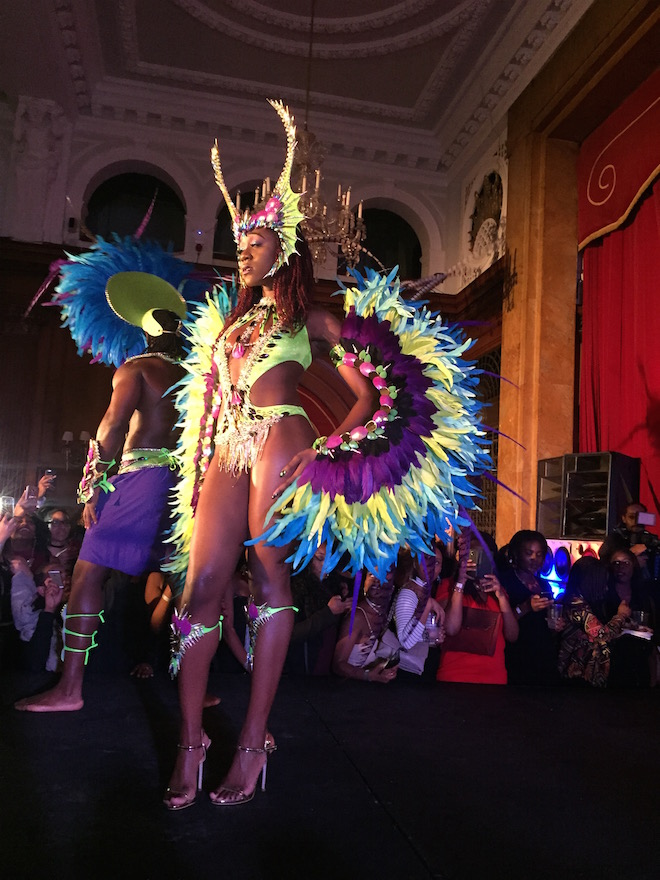 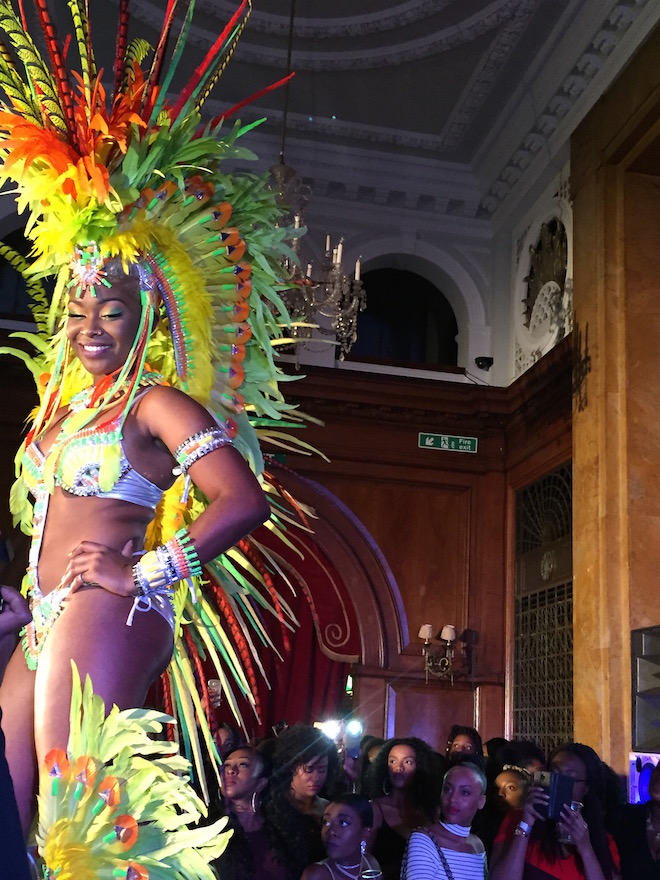 Then comes Cheetah, a personal favourite, in brown tones and animal prints. It comes from the 2014 theme: Instinct
A very flattering design and elaborate finish: 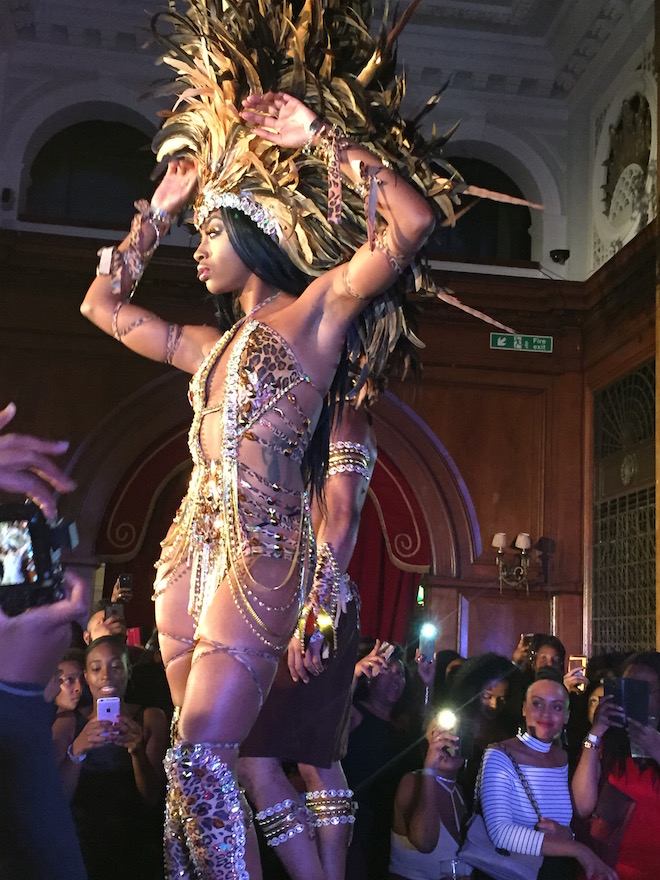 Next from the 2013 theme The Essence:  this year’s theme is: Essence of Carnival by Karma Infinity Mas band 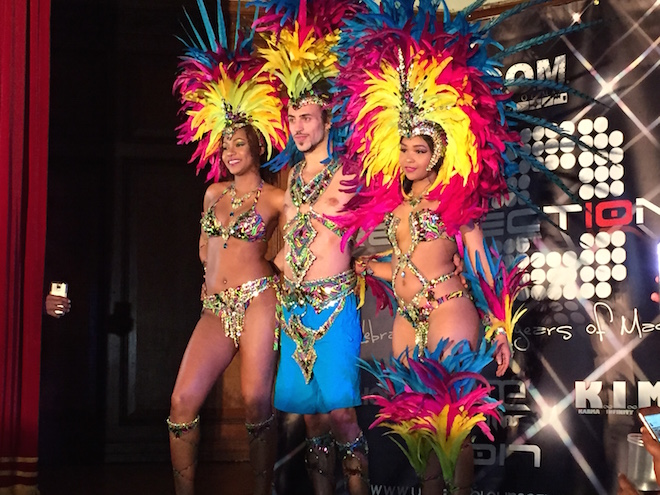 Designed by Alfred Palmer, from the 2012 theme Tribe of the World: the theme, Inca.
Great headdress for the front section! 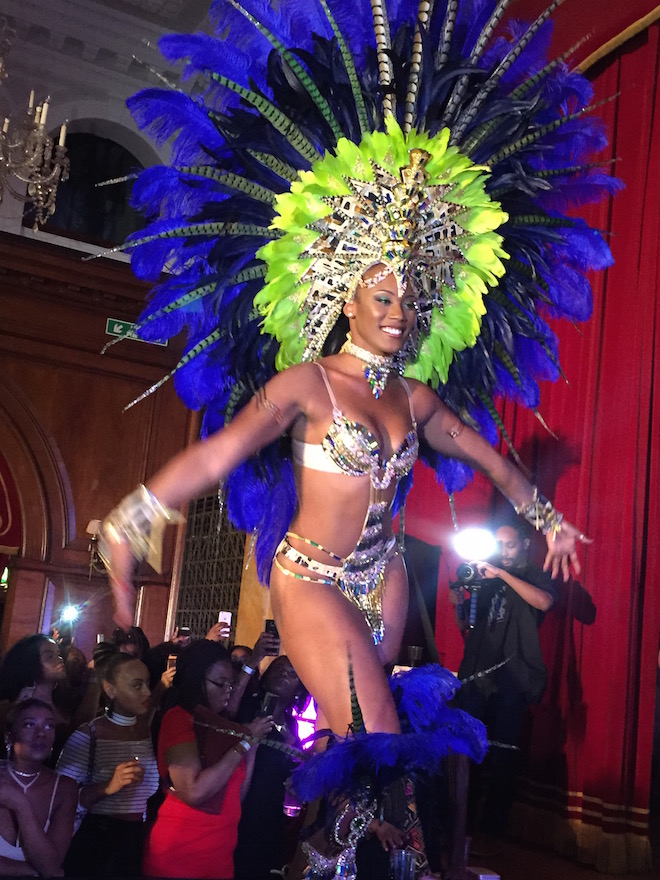 Another personal favourite of tonight presentation, is the 2011 Exotica theme, transformed this year as Erotica by Socaholic UK 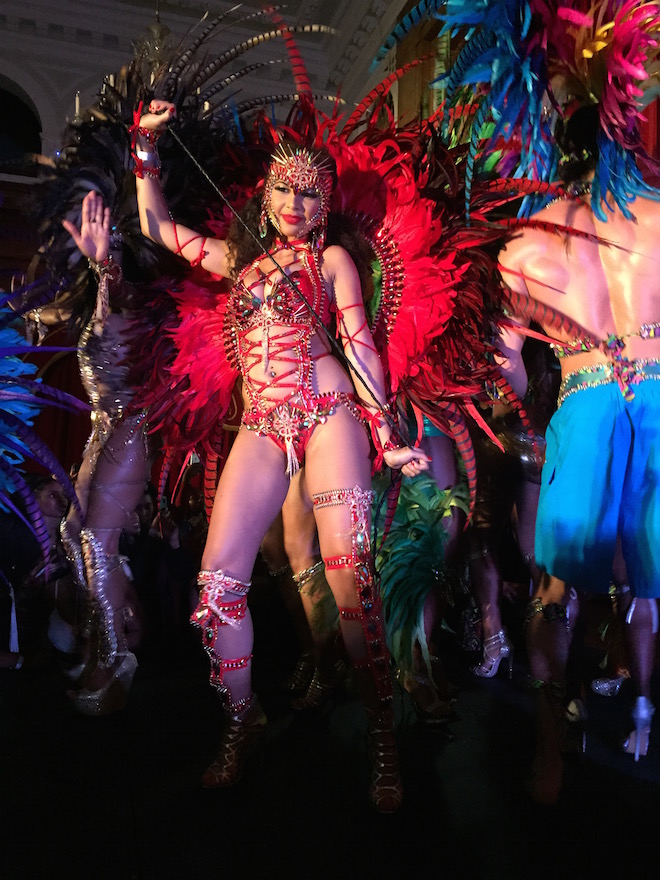 2010 was UCOM final year as Bacchanal mas with the theme Traditions, from which Blue Devil was extracted.. 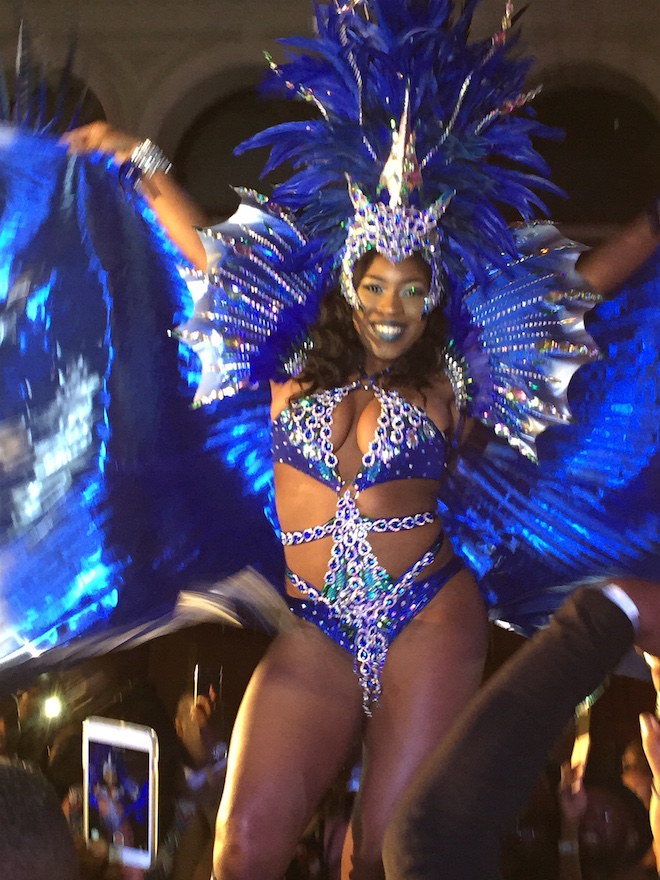 Next: Green with Envy, inspired by the 2009 design: Seven Deadly Sins. 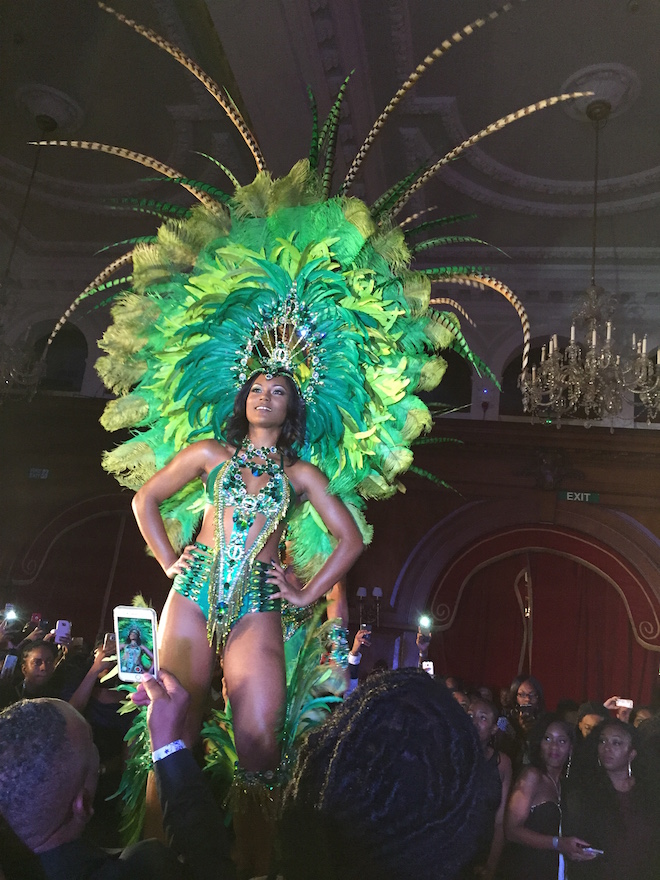 And last but not least,  a design for UCOM’s first year on the road. 2008 theme Paradise, which this year has been revamped to: Fool’s Paradise.
A great male front section with an intriguing, alluring adorned mask. 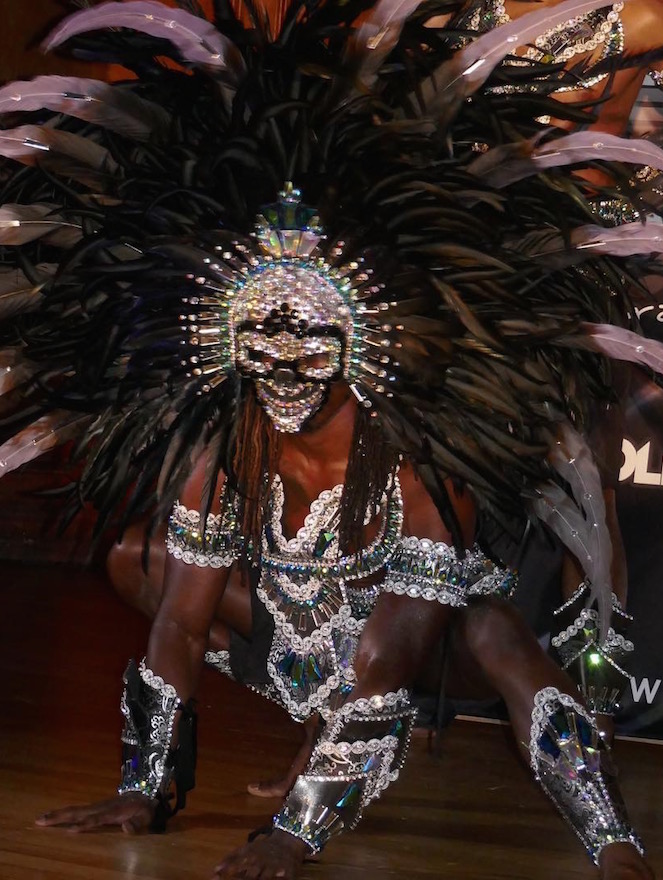 It has been a great presentation. A fantastic atmosphere, music on point, and a great catwalk show.
I would have stayed all night if I had been able to! 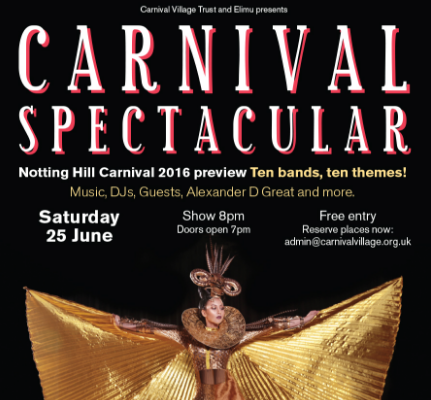 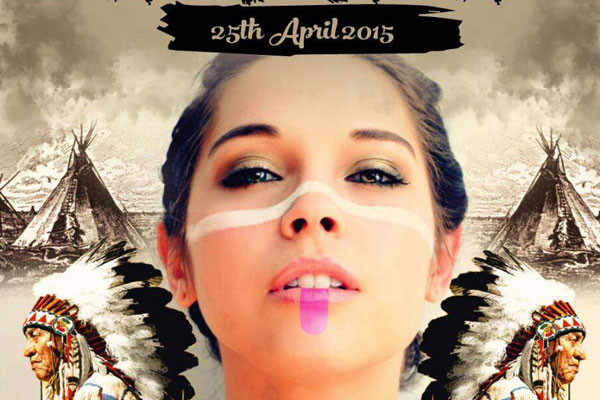 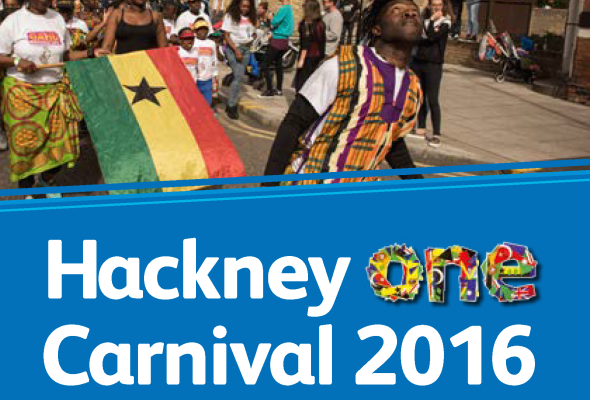